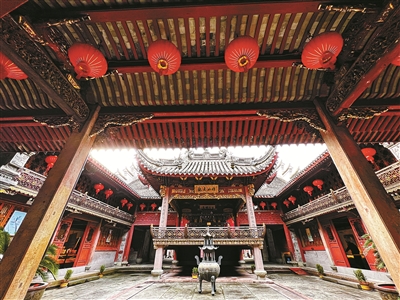 Qing'an Guild Hall, built in the Qing Dynasty, is located on the east bank of Ningbo's Yong River and was also known as the Yongdong Tianhou Palace (East Ningbo's Heavenly Queen Palace). It is one of China's major historical and cultural sites protected at the national level, a landmark of Ningbo, and an important legacy of the Ningbo section of China's Grand Canal.

Qing'an Guild Hall was built with donations from Ningbo ship merchants who did business in the Yellow Sea. It was a hall for merchants and residents to worship Mazu (the sea god venerated by China's coastal communities), a place for business gatherings, and a performance venue. Now it has been rebuilt into the first museum of maritime folk customs in China.

Qing'an Guild Hall witnessed the development of Ningbo's early international trade and shipping; it is also evidence of Mazu worship's presence in Ningbo, a port city with a community of active merchant mariners in the maritime sector. Shipping guild members who worshiped Mazu and wanted to make business connections would take part in the Guild Hall's activities. The establishment of the Guild Hall contributed greatly to the development of Ningbo's shipping industry at that time.