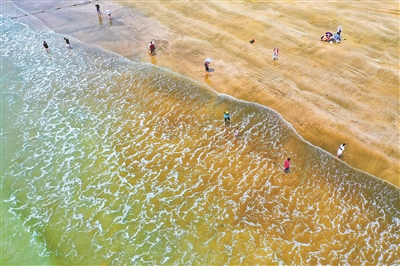 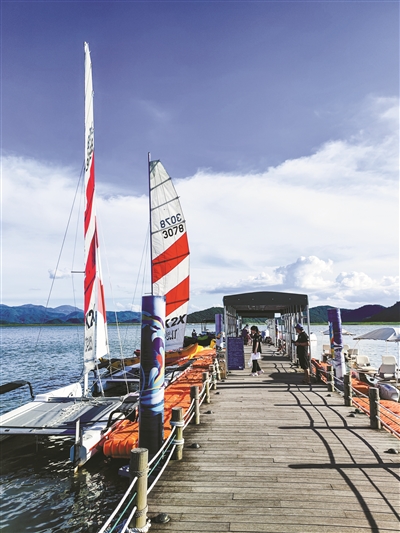 ¡¡¡¡The Seaside Tourism Town in Fenghua. ¡¡[Photo by Olga Krut] 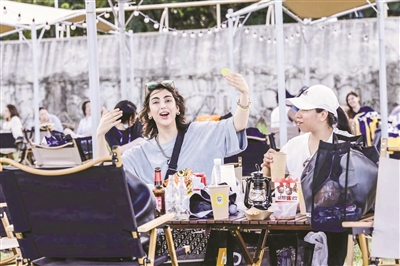 ¡¡¡¡As the summer vacation approaches, many people are planning their getaway trips. Ningbo has an abundance of great destinations: Xiangshan's beaches, the Siming Mountains National Forest Park, Dongqian Lake's resorts... It's time to start exploring!

¡¡¡¡As the temperature continues to soar, many people are in the mood for a waterside adventure.

¡¡¡¡On a fine day in June, Russian jewelry designer Olga Krut and her friends drove up to the Seaside Tourism Town in Fenghua. They were immediately amazed by the breathtaking view upon arrival.

¡¡¡¡"It was fantastic: green rolling hills, the calm bay, fluffy white clouds in the blue sky, just like something you would see in a famous photographer's work. The view reminded me of my childhood when I lived near the sea," said Olga.

¡¡¡¡Time seemed to slow down. Olga sipped iced coffee with her friends and documented her pleasant experience in a vlog.

¡¡¡¡After a dip in a swimming pool, Olga and her friends decided to go for a jet ski ride. They went to the pier and sat down behind the wheel of a jet ski. "Hold on tight!" instructed the coach. As the jet ski accelerated, Olga felt the sea wind rushing through her hair. "The speedometer read 60 km/h. Spray was flying in all directions. I was laughing and shouting with joy and felt like my soul was rejoicing," Olga described the experience excitedly.

¡¡¡¡Culture at a Beach Party

¡¡¡¡Located in Shipu Town, Xiangshan County, the Banbianshan Resort is located an 8-km^2 peninsula. It is considered the largest ecological reserve and seaside attraction in east China.

¡¡¡¡On July 1, the Chinese and international staff of HD Ningbo School held a summer beach party at Banbianshan. As the sun dipped below the horizon, a refreshing breeze picked up. A delicious feast was spread out on the table for all to enjoy, while a live band sang in the background.

¡¡¡¡Earlier in the day, the HD staff played beach volleyball and beach soccer, and tried their hand at airsoft rifle shooting. They also partook in arts and crafts: making Chinese sachets, leaf rubbing, and painting fans. For many of the international teachers, this was their first experience of traditional Chinese crafts, which triggered their curiosity and fascination.

¡¡¡¡"I wouldn't mind organizing more parties that bring together Eastern and Western culture against the backdrop of the beautiful seaside," said one of the teachers after the event.

¡¡¡¡Pre-sale tickets of many parks and resorts are selling out fast. "We have sold 40,000 early bird tickets, which is three times more than last year," said Li Bin, general manager of the Dongqian Lake Water Park.

¡¡¡¡Nearly 50,000 advance tickets have been booked for Our Sea Water Park so far, setting a record high.

¡¡¡¡A camping festival recently came to an end at Banbianshan. Although it was rainy, there were nearly 10,000 participants and 80 corporate sponsors in attendance during the three-day event.

¡¡¡¡Mountain tours are also proving popular. The Siming Mountains are a cool and refreshing hideout from the scorching summer heat. There are pick-your-own-fruit orchards where visitors can get a taste of the idyllic rural lifestyle.